As the pipe band season drew to a close following the World Championships in Glasgow, the band’s many talented solo pipers and drummers took to the competition boards.

Notable results included Ashley McMichael’s winning performances at the Northern Meeting (B-grade MSR), All Irelands (Senior MSR) and Northern Ireland Piper of the Year (MSR). Graham Drummond enjoyed wins in the ‘A’ Piobarieachd at the All Irelands and Northern Ireland Piper of the Year and a third place at the London A-grade MSR contest. Michael Fitzhenry took an impressive third place at the prestigious Silver Medal contest at the Northern Meeting.

At the Capt John MacLellan MBE Memorial contest in Edinburgh, Glenn Ross won the C-grade MSR, Jonathon Lamberton was 5th in the same contest whilst Bradley Parker was runner-up in the B-grade MSR and Kris Coyle fourth.

The Northern Ireland Piper of the Year invites the country’s finest players to pit their skills against each other. Graham Drummond was the overall winner with a first in the Piobaireachd and Hornpipe & Jig and 2nd place in the MSR. Full results were: Piobaireachd – 1st Graham, 2nd Ross Hume, 3rd Ashley McMichael; MSR – 1st Ashley, 2nd Graham, 4th Kris Coyle.

FM’s drummers were also hard at work with Aaron McLean, Aaron McCarten and Gavin Noade all successfully navigating their way to the semi-finals at the World Solo Drumming Championships.

The month of March saw Connor Sinclair win the B-grade MSR at the Duncan Johnstone Memorial Competition, closely followed by Matt Wilson who took second place in the same contest.

April brought more success for Ashley McMichael, with a 1st in the Senior Piping at the Cullybackey Solos. Scott Barr took 4th in his first Senior grade contest whilst Ross Hume was 2nd in the Intermediate grade. FM’s newest players were also on top form with James Frazer winning the Intermediate piping and Alastair Donaghy finishing second in the Junior piping contest. Not to be outdone by the pipers, snare drummer Aaron McLean was crowned Open Champion at the Kingdom Thistle Solos which is held in Fife, Scotland.

Sadly, the end of the 2014 season marked a fond farewell for pipers Donald MacPhee and Emmett Conway.

FMM stalwart, Donald MacPhee, joined the band in 2004. During his 9 year tenure, he won 33 major championships, including 6 world titles and 2 grand slams. Donald brought much fun and laughter to practices and will be greatly missed. All at Field Marshal would like to wish Donald well in his retirement.

At the beginning of October, the band bade farewell to Emmett Conway. A rising star in the piping scene, Emmett has emigrated to New Zealand to take up his appointment as Pipe Major of the New Zealand Police Pipe Band. Emmett joined FMM at the tender age of 16 and enjoyed six successful years with the band, including 4 World Championships and 2 grand slam titles. Emmett leaves with the band’s very best wishes in his new endeavour.

And finally, 2015 got off to a very exciting start for FMM’s bass drummer, Chris Pollock and his wife, Amanda. On the 1st January, their first child, Erin Sandra-Rose was welcomed into the world. Heartfelt congratulations go to Chris and Amanda. 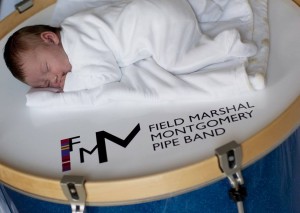