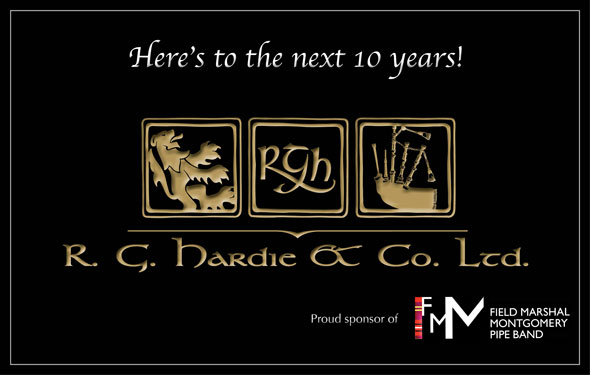 The Field Marshal Montgomery (FMM) Pipe Band of Lisburn, Northern Ireland, are delighted to confirm the recent renewal of a long-term sponsorship agreement with R. G. Hardie & Co. of Glasgow.

This new deal comes as the band’s current 10-year agreement with R. G. Hardie & Co. comes to an end. During this initial sponsorship period, FMM has seen more success on the competitive circuit than ever before in its history.

Pipe Major Richard Parkes MBE said, “FMM would not be able to do what we do without the sustained support of R. G. Hardie & Co. Since 2006, their sponsorship has helped enable the band to win 39 Major Championships, and six of the last ten World Pipe Band Championships. Like most pipe bands, we are a volunteer-based organisation. Thanks to R.G. Hardie & Co, we are able to minimize the worry about how the band will dress and equip itself; more time and effort is therefore made available to developing and refining the music and our performances.’

‘Half of FMM’s pipers play bagpipes by R. G. Hardie & Co., and I have been delighted with the contribution these pipes have made to the band’s overall drone sound over the years.”

Alastair Dunn, Managing Director of R. G. Hardie & Co., said, “Our past sponsorship of FMM has proven to be very beneficial for our company, and we are delighted to return as the band’s primary sponsor for the foreseeable future. Working with pipers and drummers of this calibre has allowed us to test and develop new products like the Piper Flex Jacket, Piper Brogues, Piper Socks and our Weather Resistant (WR) Piper Bag Cover. All of these products were tested in the band, to ensure they were fit for purpose, before they were launched onto the market.’

‘We have been continuously delighted with FMM’s repeated success since our partnership first began, and we look forward to working with them as we both strive to reach new highs in the coming years.”

Formed in 1945, Field Marshal Montgomery Pipe Band has been led by Pipe Major Richard Parkes MBE since 1981. The band entered the top six prize list at the World Pipe Band Championships for the first time in 1990, and proceeded to win the overall title in 1992.  Since then, FMM has won 10 World Championship titles, four of which were consecutively from 2011 to 2014. The band has made a strong start to the 2015 season with a win at the recent British Pipe Band Championships in Bathgate, Scotland.