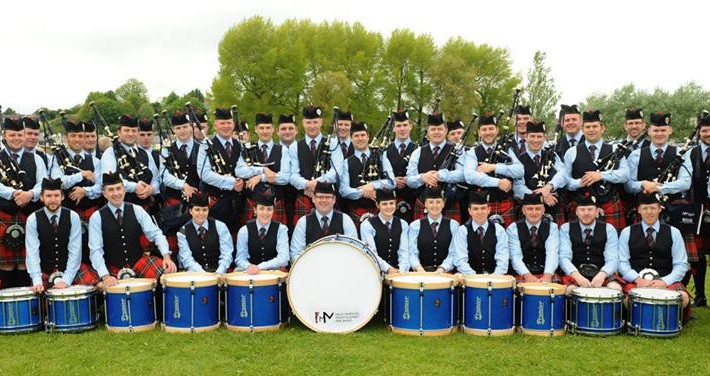 This is the newest major championship in the RSPBA Calendar replacing the long-standing Cowal Highland Gathering for the first time in 2014. The competition is held in the beautiful grounds of Stormont Estate with Northern Ireland’s Parliament buildings providing a suitably grand backdrop.

It was a warm and sunny day attracting over 10,000 spectators and 92 bands from around the UK, Ireland and Europe. FMM played 9th in the Grade 1 contest and drew their No. 2 medley, the affectionately named, “Maxwell’s Bonnet medley”.

Pipe Major Richard Parkes MBE commented after the contest, “Despite the warm weather conditions, there was a cool breeze and intermittent cloud cover which made it a difficult day for tuning pipes and we didn’t enjoy our usual relaxed tune up. It is days like these when the experience within the pipe section comes to the fore and I was very pleased with our final product. The pitch of chanters and drones held well throughout our performance and I was delighted to come away with a win.”

Drum Sergeant Keith Orr added, “The drummers had a very strong run and the bass section continue to add an excellent dynamic to the overall ensemble effect. It is always special to win on home soil and the local support for the band was exceptional. With four of the five major championships taking place in Scotland, it was great for our friends and families to have the opportunity to come and see the band play in such a big competition. Without their support the band wouldn’t exist and being able to share this win with them added to the achievement.”

In November 2013, the band’s much loved President, William Maxwell, sadly passed away. “We wanted to do something to honour Billy,” said Richard, “and playing his tune, one which we enjoyed success with in 1992, seemed a very fitting tribute. No one was prouder of FM than Billy and I think he would have been very happy with our performance today.”

With thanks to Dronechorus, the band’s winning performance can be viewed below.

The band will be back in action next Saturday, 20th June at the Craigavon & District Championships in Lurgan, Northern Ireland.