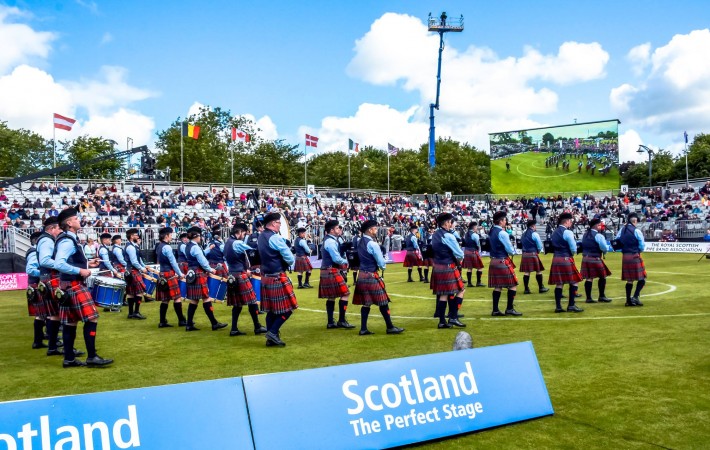 Field Marshal Montgomery finished fourth at the World Pipe Band Championships and were crowned Champion of Champions for 2015.

It was also a very successful day for Drum Major Emma Barr who finished third in the Juvenile Grade and was announced the 2015 Champion of Champions.

The two-day event saw 22 bands compete in the qualifying round on Friday, 14th August with the top 12 returning the following day for the Grade 1 Worlds final. FMM performed their No. 1 MSR – Brigadier General Ronald Cheape of Tiroran, Blair Drummond & Pretty Marion – and their very popular No. 2 “Maxwell’s Bonnet” medley in the qualifiers. The band returned on the Saturday to play their No. 2 MSR – Balmoral Highlanders, John Roy Stewart & Charlie’s Welcome – and their No. 1 “A Wee Bit out of the Ordinary” medley. Four fantastic performances saw the band win the piping across all events.

The band was awarded the Champion of Champions prize for a record fourteenth time.

This year, the eventual winners were Shotts & Dykehead Caledonia Pipe Band. The band would like to extend its warmest congratulations to Pipe Major Ryan Canning and Drum Sergeant Jim Kilpatrick. Ryan was a member of FMM for 16 years before taking up his position as Pipe Major of Shotts in 2013 and all at FMM are very pleased for Ryan and this milestone success in his career.

FMM would also like to wish Pipe Major Ross Walker of Boghall and Bathgate Caledonia Pipe Band well in his retirement. With consistent top 6 finishes at Major championships for the past 20 years and more, Ross and the Boghall band are highly respected and notable adversaries of FMM. Best wishes in your retirement, Ross!

The World Pipe Band Championships marks the end of FMM’s 2015 competition season. The band would like to take this opportunity to pay thanks to sponsors R.G. Hardie & Co., Premier Percussion and Ace Percussion; sound assistants Frank Andrews, Scott Drummond and Lynsey McLaren; the band’s chanter, pipe bag and reed suppliers; the College of Piping and Monkstown Community School for providing practice facilities; the FMM management team; and all their friends and families from across the world who continue to support, encourage and make sacrifices for the band and its players.

A final thanks to all our supporters, for your relentless support, constant motivation and endless encouragement. We look forward to seeing you all “on the grass” in 2016.