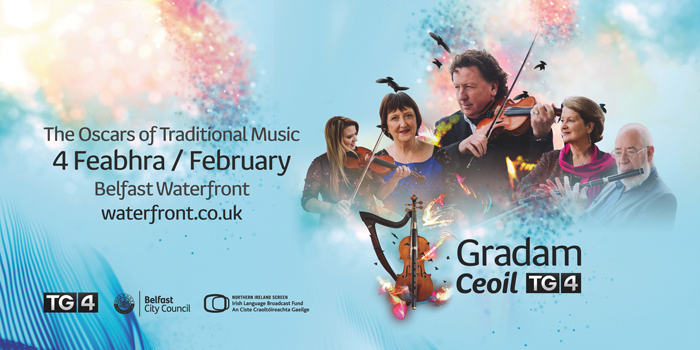 Issued on behalf of TG4 and Gradam Ceoil
Press Release: 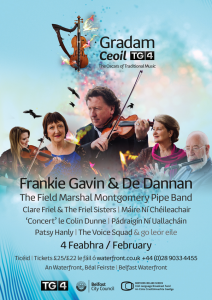 Widely regarded as the Oscars of Irish music, the Gradam Ceoil award ceremony is set to come to Belfast next year for the first time in its 21-year history.  The ceremony and concert will take place on Sunday 4th February, 2018 in the Belfast Waterfront and will also be broadcast live on TG4.

The band is led by Dromore multi-award-winning piper Richard Parkes MBE, who has held the position of Pipe Major since 1981. Throughout his career, Richard has won seven All Ireland Senior Solo Championships, eight Northern Ireland Piper of the Year titles, nine Ulster Senior Championships and a number of other senior solo competitions across the UK. Richard gained an MBE from her Majesty the Queen in 2004.

Under Richard’s artistic direction and leadership, the band has expanded their repertoire and innovated in the arrangement of traditional music for pipe bands, and remains committed to the inclusion of new compositions.

Upon winning the award, Richard stated:

“It’s an honour to be recognised by our peers through this award, particularly because the standard of traditional music is so high.  We’re overwhelmed.

“We are extremely grateful for the support we have received over the years and remain as driven and motivated as ever for the future.”

The Field Marshall Montgomery Pipe Band will be presented with their award at the TG4 Gradam Ceoil concert and awards ceremony on Sunday 4th February 2018 in the Belfast Waterfront.

A total of seven awards will be given out on the night, with other winners including;