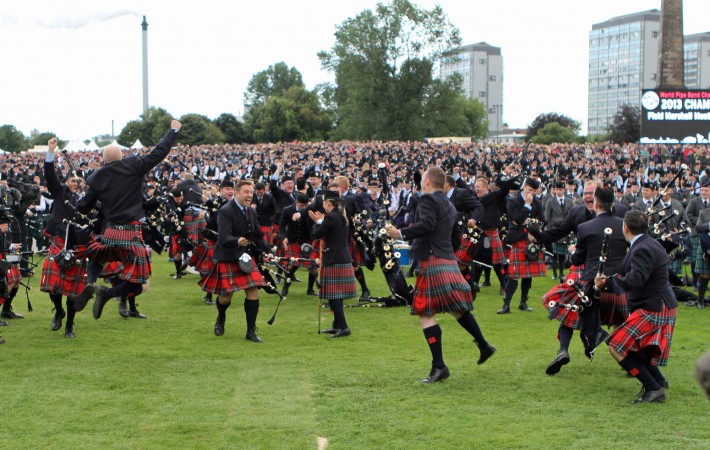 It was also a hugely successful day for FMM’s Drum Major Samantha Gordon who was placed 4th in the World Senior Drum Major contest.

This year the ‘Worlds’ was contested over two days with all Grade 1 bands competing in a qualifying heat on Saturday with a final the following day.

The band’s performances in the final can be viewed on the BBC ‘Worlds’ page –www.bbc.co.uk/events/ex6g9r

Everyone in FMM was delighted with how the band played and the victory – as demonstrated by the unbridled joy and relief expressed by the band when FMM’s name was announced as World Champions!

The clear consensus is that the standard in Grade 1 continues to reach new heights, so to win the ‘Worlds’ for a third year in succession is a tremendous and humbling achievement.

The band is extremely grateful for the good wishes from our fellow competitors following Sunday’s result. In particular, the band would like to thank the trio of ScottishPower pipers (David Caldwell, Alasdair MacKenzie and Jason Briscoe) who welcomed the band off the bus at our hotel on Sunday night!! Such camaraderie and sportsmanship is what makes the pipe band world great and the respect which everyone in FMM has for our fellow competitors makes winning the title all the more special. 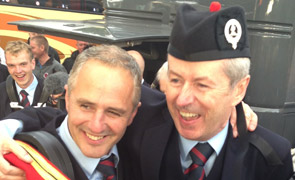 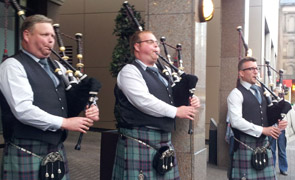 Commenting on Sunday’s result, Pipe Major Richard Parkes MBE said “I’m absolutely delighted to have retained the ‘Worlds’. The quality of the competition was extremely high and we had to pull out all the stops to win against some very talented bands.”

“I am also thrilled for Keith Orr and his drum corps. Keith’s contribution to the band over the years cannot be underestimated and on a personal level it gives me great pleasure to see him secure a thoroughly deserved world drumming title.”

“Producing a performance capable of winning the Worlds against such strong competition is not just about the quality, professionalism and musicianship of the players in the band. It is also about our wider FMM network.”

“While there are far too many people who have helped us over the year to mention, I’d like to thank our sponsors RG Hardie & Co who continue to provide fantastic support to the band; Premier Percussion for supporting Keith and the corps; Frank Andrews, Scott Drummond and Lynsey McLaren who work magic on the drones, our chanter, pipe-bag and reed suppliers; the College of Piping for providing practice facilities for our Glasgow players; the FMM management team; and all our friends and families from across the world who continue to support, encourage and make sacrifices for the band and its players.”

Drum Sergeant Keith Orr added “As leader of FMM’s drum corps my primary focus is – and always will be – the overall ensemble of the band. However, I’m absolutely delighted to have secured the band’s first ever drum corps title. We have been close on a number of occasions so to win this year is hugely satisfying. This is the most talented corps we have ever had and the effort the team has put in over the past year has been unbelievable. I cannot thank them enough for their professionalism and dedication. The addition of Andrew Elliot and Kyle Heaney has been a hugely important factor as they have brought new dynamism to the band and greatly enhanced the ensemble contribution of the entire corps.”

More pictures of the band from the weekend will be added to our Facebook page in the coming days. Field Marshal Montgomery Pipe Band’s final competition of the year will be the Cowal Championships on 31st August.