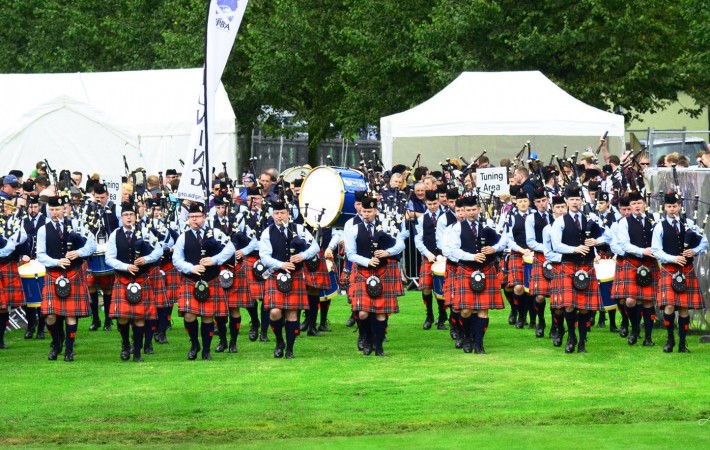 It was also a hugely successful day for FMM’s Drum Major Samantha Gordon who was placed 2nd in the World Senior Drum Major contest, her best result to date.

In a similar fashion to 2013, this year’s Worlds was contested over two days with all Grade 1 bands competing in a qualifying heat on Friday with a final the following day.

The band’s performances in the final can be viewed on the BBC ‘Worlds’ page.

Commenting on the result, Pipe Major Richard Parkes MBE said, “I am absolutely thrilled that we have retained the Worlds’ title. The competition is getting stronger every year, and this year’s final was one of the most closely fought yet. To win four years in succession and claim our tenth World Championship title is truly remarkable and I am very proud of every player.”

“2014 has been another very successful season for the band and today’s win marks our 60th Major Championship title, a significant milestone in the band’s history. On behalf of the players I would like to extend our heartfelt thanks to the wider FMM network, without whom FMM would not exist.”

“Special thanks to our sponsors RG Hardie & Co and Premier Percussion; our sound assistants Frank Andrews, Scott Drummond and Lynsey McLaren; our chanter, pipe-bag and reed suppliers; the College of Piping and Monkstown Community School for providing practice facilities; the FMM management team; and all our friends and families from across the world who continue to support, encourage and make sacrifices for the band and its players.”

The World Pipe Band Championships marks the end of FMM’s 2014 competition season. The band will now take a break to unwind, spend valuable time with their friends and families and will soon start preparations for the 2015 season.

A final thanks to all our supporters, for your relentless support, constant motivation and encouragement. We look forward to seeing you all “on the grass” in 2015.